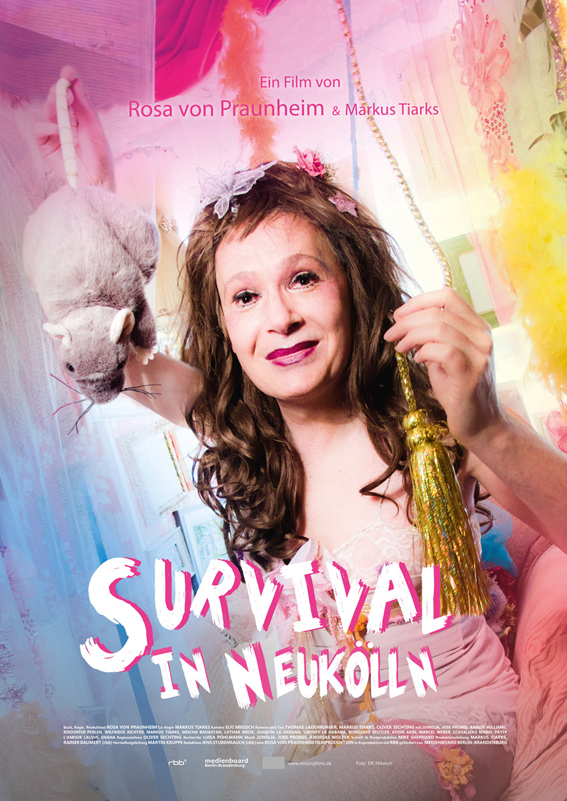 Stefan Stricker, who calls himself Juwelia, runs a gallery in Berlin's Neukölln district. Every weekend he invites people, telling them stories of his life and singign lyrical songs, he wrote with a friedn from Hollywood. Along with Juwelia we meet other residents of Neukölln: Androgynous Cuban singer-dancer Joaquin la Habana, who live with his husband. Syrian singer Enana, who hopes for a liberal life full as a lesbain after fleeing to Berlin. For the last five years the big parts of Neukölln has been hipsterfyed and gentrifyed. Can the real people survive?

was born Holger Mischwitzky in 1942 in Riga, Latvia. He was raised in the GDR just outside of Berlin up until 1953, when he fled with his parents. After a few detours, the family settled in Frankfurt am Main in the district of Praunheim, where Mischwitzky attended a humanistic high school. Leaving school early, he then studied painting at the Offenbacher Werkkunstschule (today: Offenbach University of Art and Design [HfG]). After a year, he transferred to the Berlin University of the Arts. He ended his studies without graduating. At that time, the mid-1960s, he also adopted his artist name, Rosa von Praunheim, which he sees as a reference to the Frankfurt district of Praunheim, where he lived as a child, and the “Rosa Winkle” (“pink triangle”), the symbol used to by the Third Reich to identify homosexuals in the concentration camps.

In 1967, Rosa von Praunheim made his first film, a short entitled VON ROSA VON PRAUNHEIM. His directorial debut was followed by further shorts and experimental films, including GROTESK – BURLESK – PITTORESK [GROTESQUE – BURLESQUE – PICTURESQUE] (1968) and SCHWESTERN DER REVOLUTION [SISTERS OF THE REVOLUTION] (1969). His first feature-length film, THE BED SAUSAGE (1970), quickly became considered a “cult film”. With his follow-up film, the documentary IT’S NOT THE HOMOSEXUAL WHO IS PERVERSE, BUT THE SOCIETY IN WHICH HE LIVES (1970), von Praunheim became, more or less overnight, an icon of the German gay rights movement, which also received a noticeable push by the movie. In the years that have followed, Rosa von Praunheim’s feature and documentary films have been characterised by three core motifs: the life journeys of lively, elderly women (e.g., OUR CORPSES STILL LIVE [1981]), homosexuality and Aids (e.g., A VIRUS KNOWS NO MORALS [1985]), and the city of New York (SURVIVAL IN NEW YORK [1989]).
To date, Rosa von Praunheim has directed over 70 films. More than 20 of them premiered at the Berlinale, making him the record holder. In addition to making films, since the 1960s Rosa von Praunheim has also been active as an author and has published books such as Sex und Karriere [Sex and Career], Armee der Liebenden oder Aufstand der Perversen [Army of Lovers, or Revolt of the Perverts], and Ein Penis stirbt immer zuletzt [A Penis Is Always the Last to Die]). From 2000 to 2006, he taught film direction at the Academy for Film and Television in Potsdam, and in 2009 he became a member of the Berlin Academy of Arts, section Film and Media Art; from 2015 to 2018, he was even the director of that section. In 2015, he added the German Federal Cross of Merit to his long list of awards.