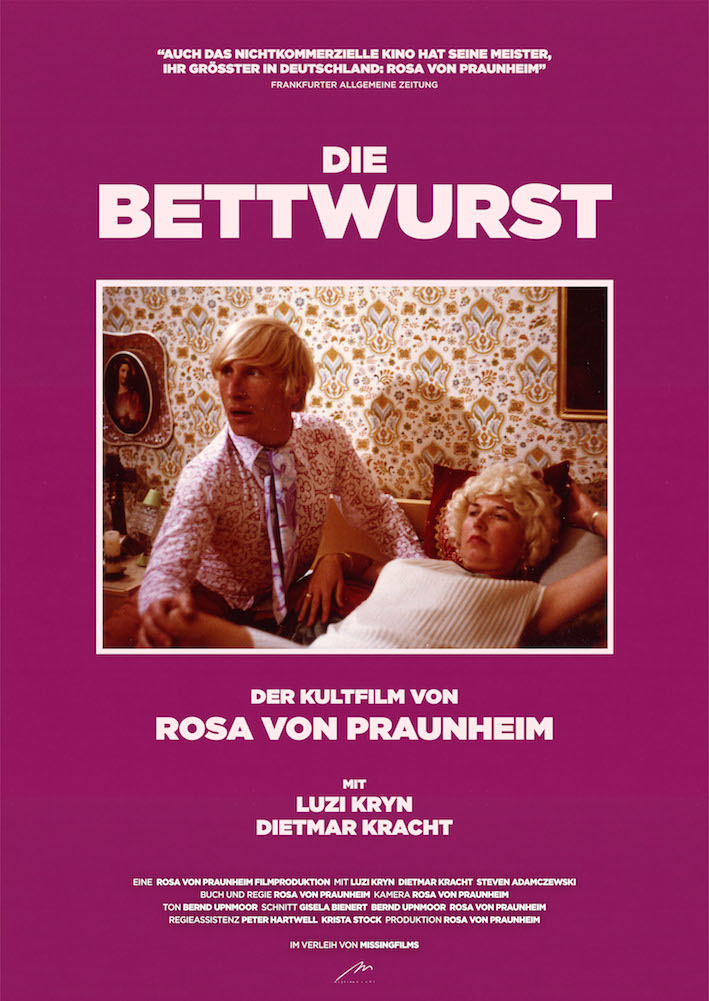 Luzi and Dietmar get to know each other and fall in love in the seaport town of Kiel. She is an older, petty-bourgeois secretary, he a young, unskilled worker from Berlin. Both masquerade the middle-class rituals learnt from their upbringing and the media – they go dancing in a seaside café; she shows off her garden allotment and her photo-albums. After a night of making love, he helps her vacuum the house. They celebrate Christmas together. Then out of the blue, old criminal acquaintances of Dietmar turn up and kidnap Luzi in the hope of coercing Dietmar to join forces with them once again. In the style of a spoof, Dietmar shoots the perpetrators on the beach, and flees with Luzi by means of a small private plane into an uncertain future.

As grotesque and entertaining as Praunheim's trivial plot appears on the screen, "The Bettwurst" nonetheless has the qualities of an earnest, well-thought-out social study. The film, shot in ten days without a script, is primarily intended to be understood as a documentary freezeframe of the two main actors. In their often clumsy dialogue improvisations, courtship arias ("I love you, unimaginably!") and everyday habits ("At my house, there shall be order!"), they reveal at any given moment what the filmmaker perceives; that they are suffering, their souls crushed by the circumstances in which they live.Helpful "additional information" (von Praunheim) about the protagonists is provided by the ending, which is contrived and no longer documentary: Dietmar melodramatically casts himself as the stylised tragic hero, while the energetic Luzi remains calm and imperturbable, even in mock distress.Rosa von Praunheim, who accounts for his film as the »result of my relationships with the main characters« (Luzi is his aunt, and Dietmar lived with him for a year), hopes that the audience will recognize itself in "The Bettwurst" and "experience how funny our own stupidity is". DER SPIEGEL

‘Even Independant cinema has its Maestro, the biggest in Germany: Rosa von Praunheim’  - Frankfurter Allgemeine Zeitung

was born Holger Mischwitzky in 1942 in Riga, Latvia. He was raised in the GDR just outside of Berlin up until 1953, when he fled with his parents. After a few detours, the family settled in Frankfurt am Main in the district of Praunheim, where Mischwitzky attended a humanistic high school. Leaving school early, he then studied painting at the Offenbacher Werkkunstschule (today: Offenbach University of Art and Design [HfG]). After a year, he transferred to the Berlin University of the Arts. He ended his studies without graduating. At that time, the mid-1960s, he also adopted his artist name, Rosa von Praunheim, which he sees as a reference to the Frankfurt district of Praunheim, where he lived as a child, and the “Rosa Winkle” (“pink triangle”), the symbol used to by the Third Reich to identify homosexuals in the concentration camps.

In 1967, Rosa von Praunheim made his first film, a short entitled VON ROSA VON PRAUNHEIM. His directorial debut was followed by further shorts and experimental films, including GROTESK – BURLESK – PITTORESK [GROTESQUE – BURLESQUE – PICTURESQUE] (1968) and SCHWESTERN DER REVOLUTION [SISTERS OF THE REVOLUTION] (1969). His first feature-length film, THE BED SAUSAGE (1970), quickly became considered a “cult film”. With his follow-up film, the documentary IT’S NOT THE HOMOSEXUAL WHO IS PERVERSE, BUT THE SOCIETY IN WHICH HE LIVES (1970), von Praunheim became, more or less overnight, an icon of the German gay rights movement, which also received a noticeable push by the movie. In the years that have followed, Rosa von Praunheim’s feature and documentary films have been characterised by three core motifs: the life journeys of lively, elderly women (e.g., OUR CORPSES STILL LIVE [1981]), homosexuality and Aids (e.g., A VIRUS KNOWS NO MORALS [1985]), and the city of New York (SURVIVAL IN NEW YORK [1989]).
To date, Rosa von Praunheim has directed over 70 films. More than 20 of them premiered at the Berlinale, making him the record holder. In addition to making films, since the 1960s Rosa von Praunheim has also been active as an author and has published books such as Sex und Karriere [Sex and Career], Armee der Liebenden oder Aufstand der Perversen [Army of Lovers, or Revolt of the Perverts], and Ein Penis stirbt immer zuletzt [A Penis Is Always the Last to Die]). From 2000 to 2006, he taught film direction at the Academy for Film and Television in Potsdam, and in 2009 he became a member of the Berlin Academy of Arts, section Film and Media Art; from 2015 to 2018, he was even the director of that section. In 2015, he added the German Federal Cross of Merit to his long list of awards.